I visited Iran with my friend Alireza in November 2013.

Ali took most of the beautiful photos of Iran on my blog (I took the shitty ones with my iPhone).

Ali’s home is in an area called Farmaniyeh in Northern Tehran. It’s a very fancy neighbourhood, there are lots of luxury residential buildings, and people are dressed more liberally and in the Western style. Having spent four days on the train, we felt like we were born again after a long shower. After breakfast we exchanged some money and took a taxi to Golestan Palace. Because of Muharrem there were signs with verses from Quran everywhere.

Golestan Palace stands in a smallish garden in the city centre. It was actually built by Safavids but Qajars made alterations and additions to bring it to its current state. The mirror work and the glazed tiles are absolutely stunning. The furniture in the palace is mostly European. 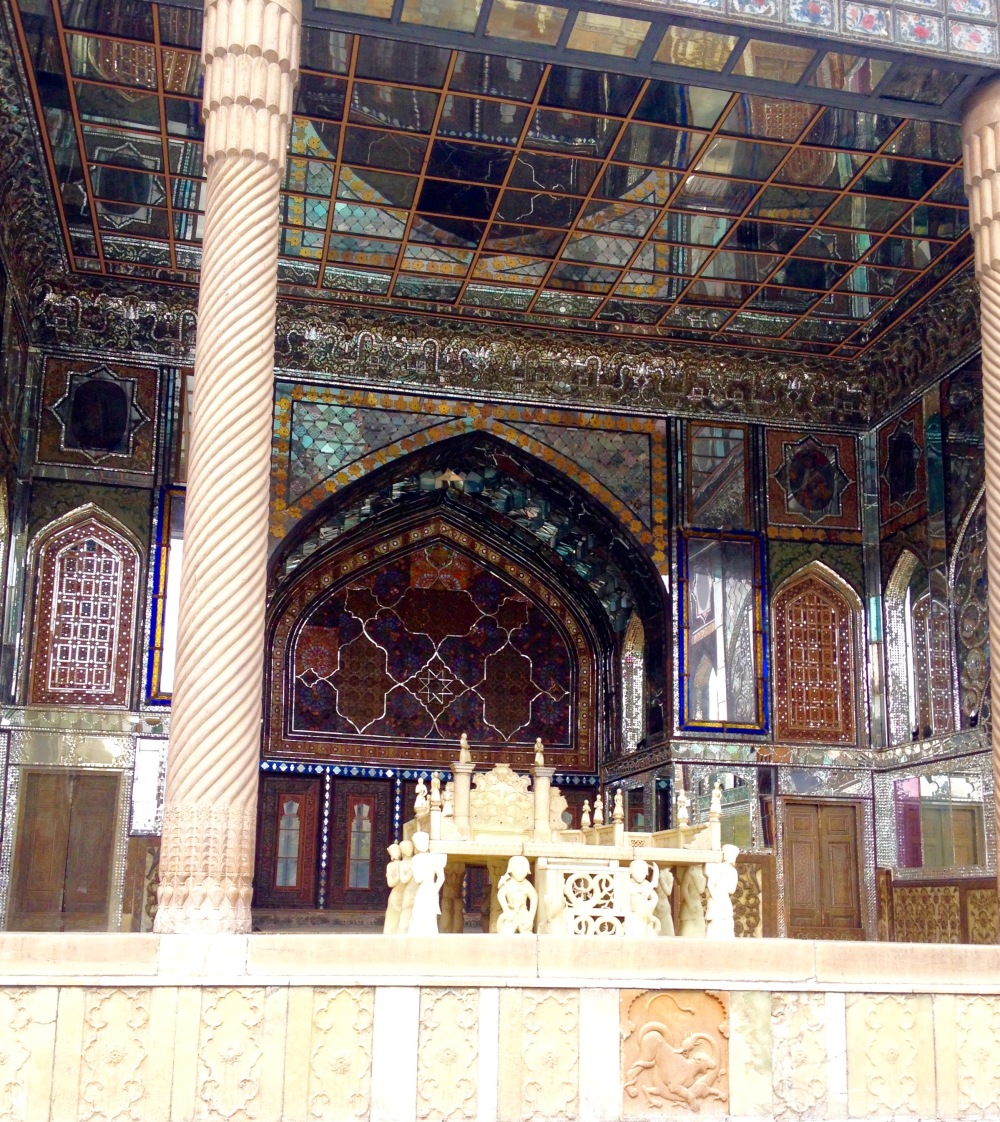 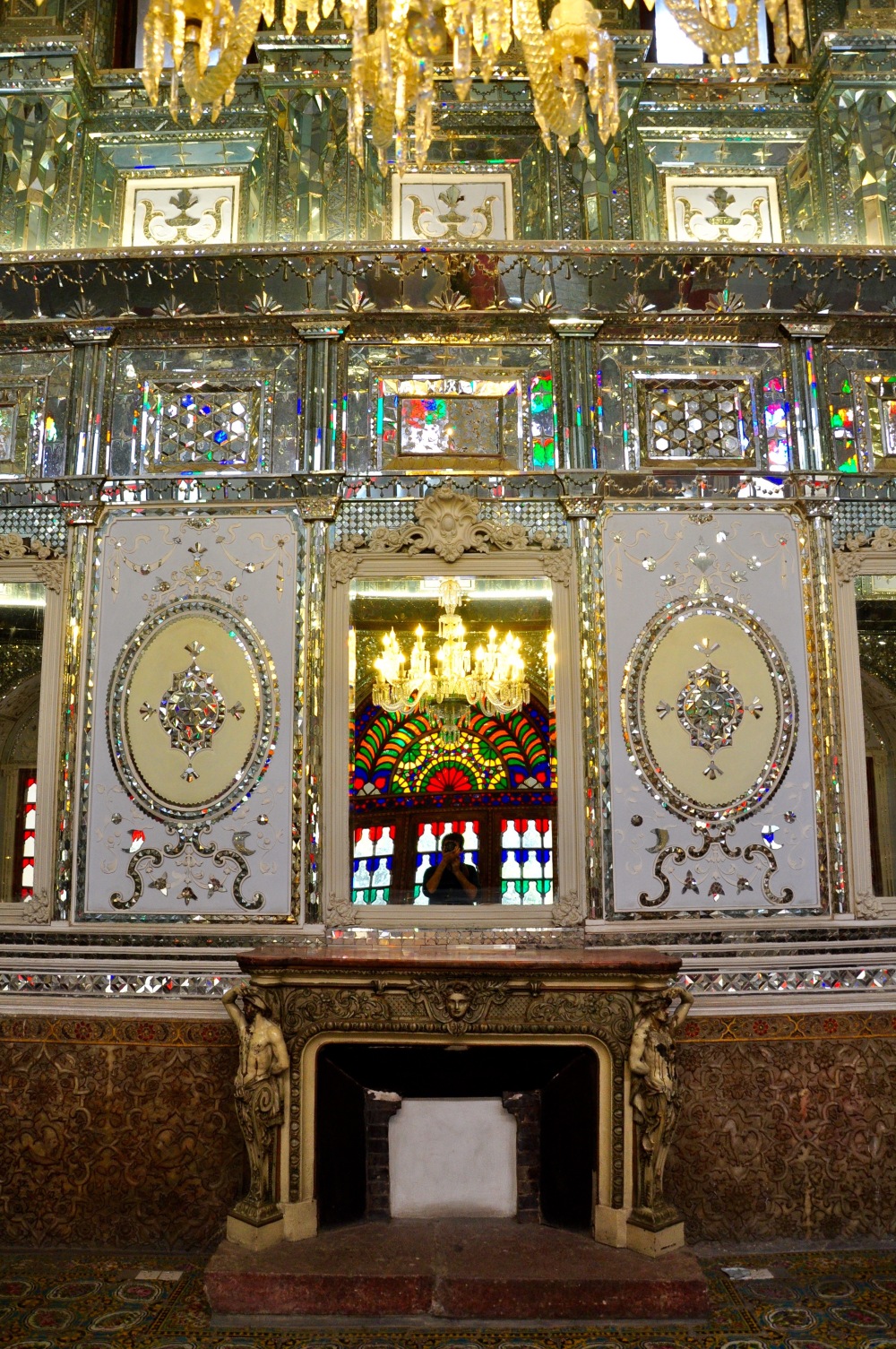 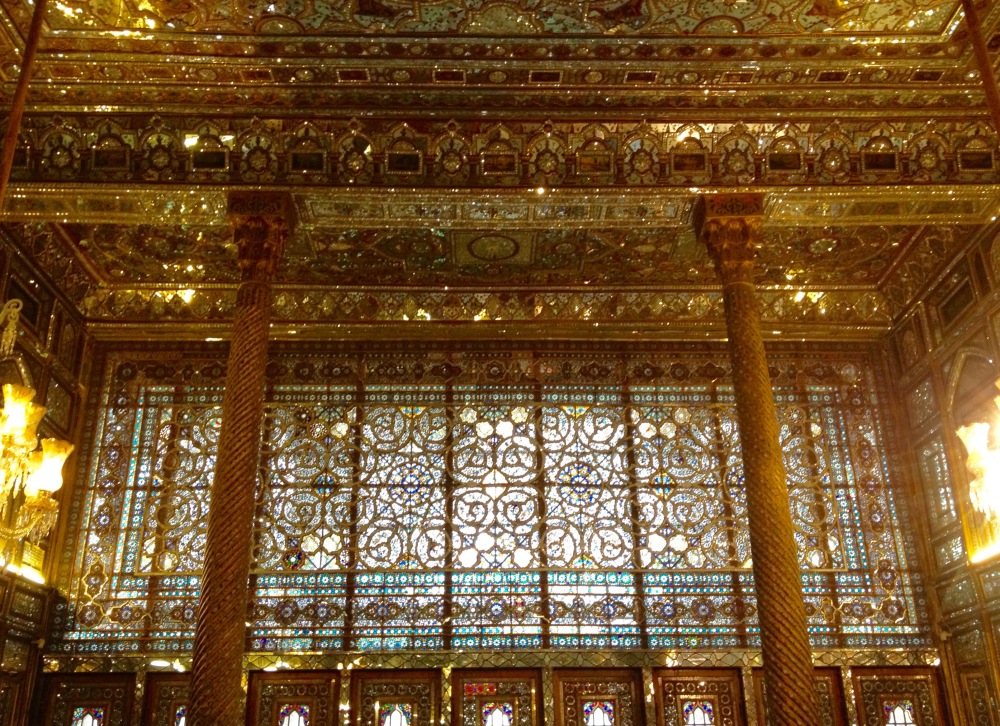 In the palace you can see photographs of Qajar ruler Nasser al-Din Shah’s harem, which are very interesting because they show how modern the shah was in a way, and also you can see how beauty standards have changed over the centuries. All women in the photos are quite chunky, have bushy eyebrows and full moustaches. 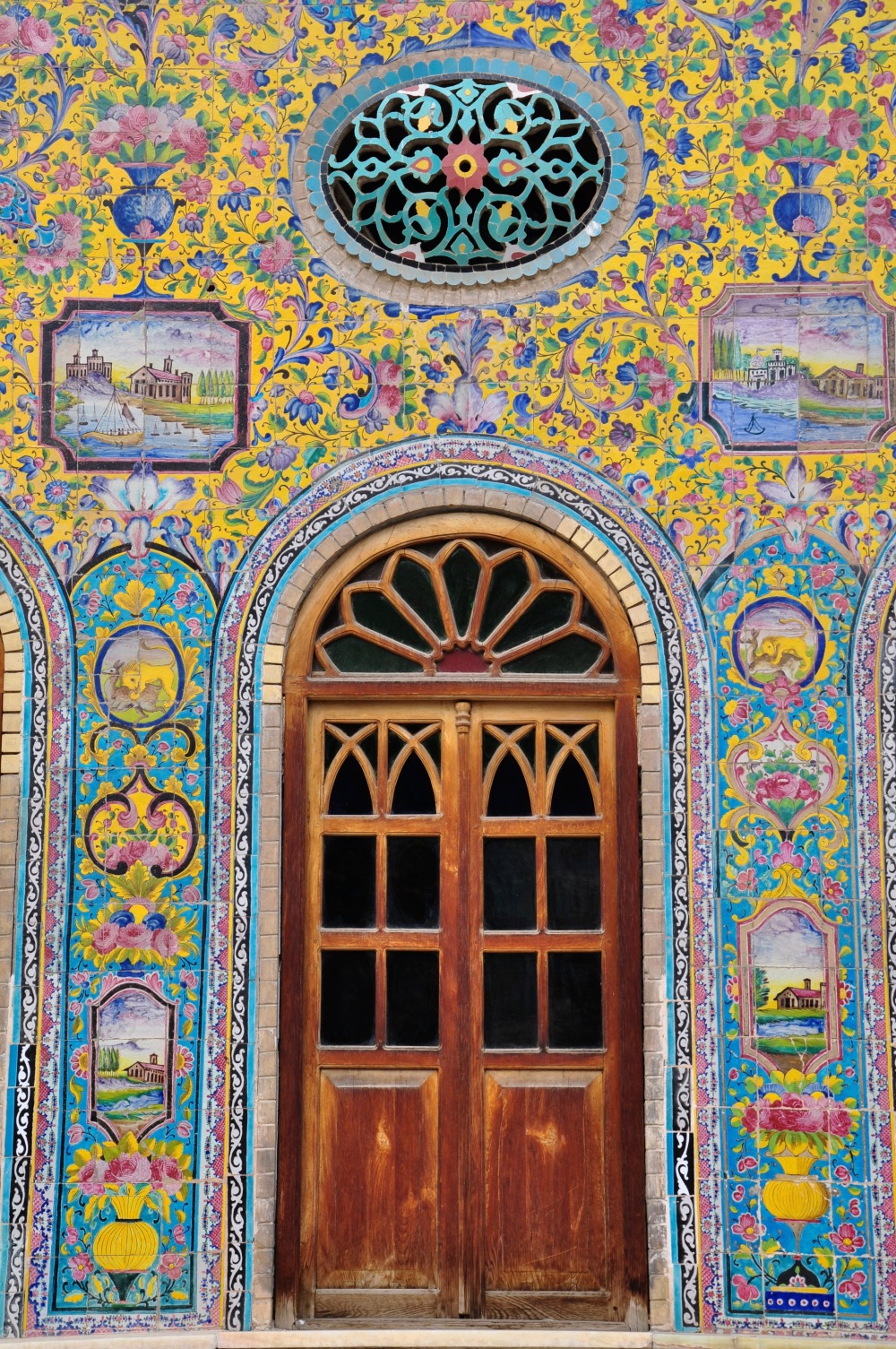 The garden of the palace complex is as pretty as the inside of the buildings. Since the palace is located in the busy city centre, people prefer to take a break and relax here. We really enjoyed watching palace guards flirt with art students sketching in the garden. 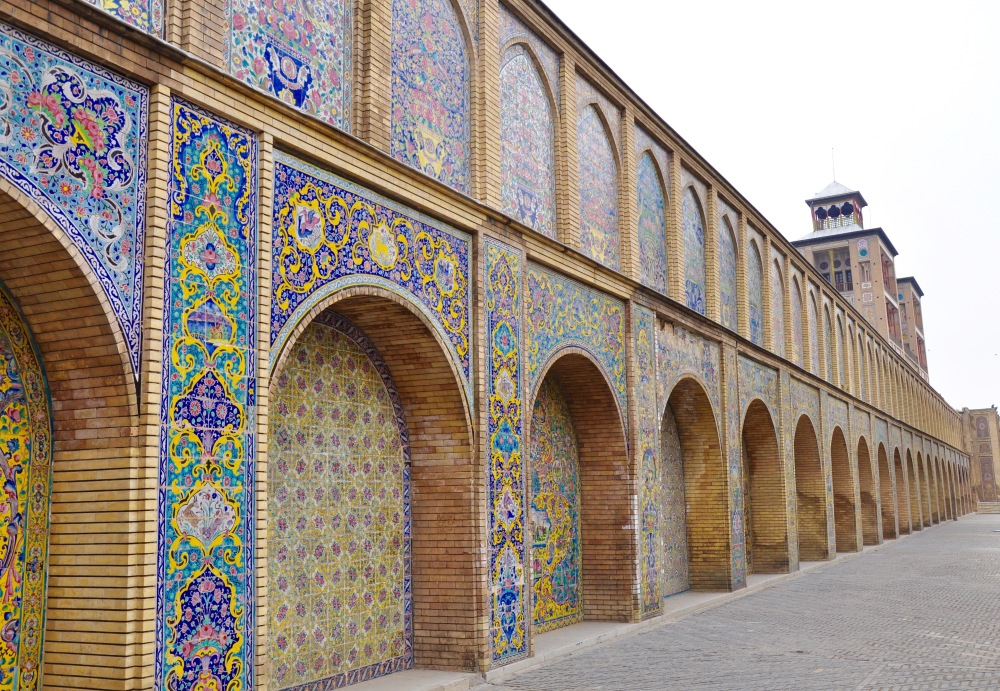 Entry fees for museums and historical sites in Iran are five times more expensive for foreigners than the fees for Iranians. Thanks to my Middle Eastern looks and Ali’s sweet talking skills, we always paid the Iranian fees. 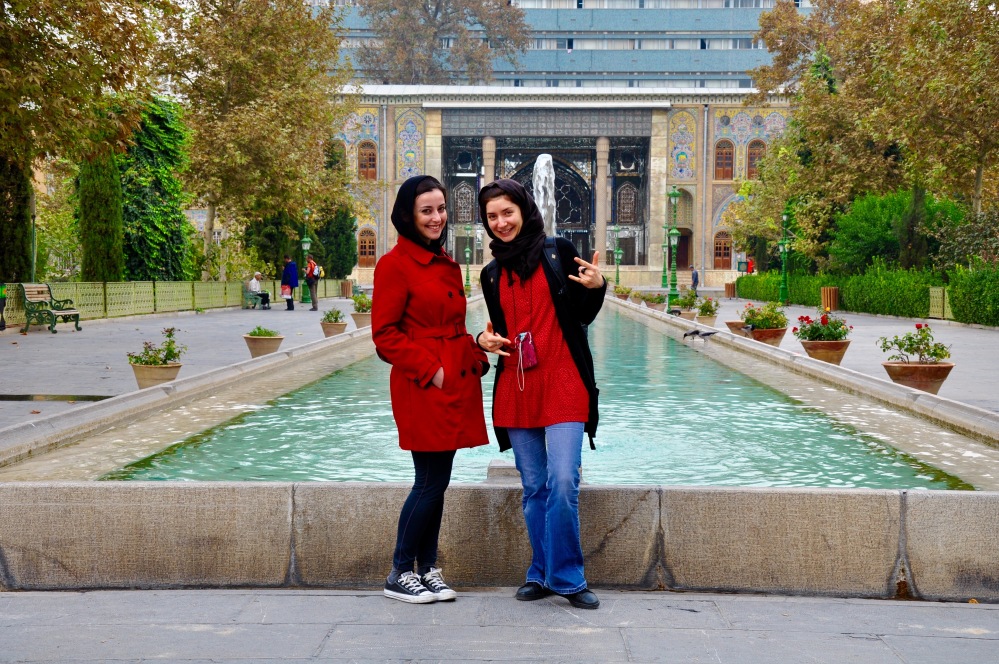 After visiting Golestan Palace, we went to Bazar-i Bozurg (Grand Bazaar) for lunch, but first I had to try the boiled beetroots that haunted me for years after I read The Child Who Sold Beets by Iranian author Samad Behrengi as a little girl. We also tried some boiled broad beans that the same guy sold which are served with salt and cayenne pepper. We walked around the bazaar for a while; there are different areas for shoes, textiles, gold and rugs. Ali explained how the Bazaar was the heart of Iranian economy and everyone who had a shop there was a millionaire, and I shouldn’t be fooled by how shabby they looked.

I love Iranian cuisine. Everything tastes delicious to my Middle Eastern palate, but there are also some distinct flavours like saffron and dried lime. Everyone from Tehran would tell you to eat at Moslem if you want to have some traditional food, apparently this shabby canteen is very popular among locals. It was packed, so we fought our way to a table after our walk at the Bazaar and tried their chelo kebab and zereshk-polo. Chelo kebab was one long shish kebab and pieces of lamb kebab on lots of rice. Zereshk-polo was two huge pieces of chicken on the bone on a mountain of saffron rice, some sort of rice cake called tahchin that was bigger than the pillows on the train with pistachio and red berries sprinkled on it; and it tasted amazing. Ali approved the quality of the dish this time around and seemed to really (like REALLY) enjoy it. We also ordered salad, garlic yoghurt and green olives with pomegranate molasses and drank delicious refreshing doogh with dried herbs. Food portions are incredible in Iran and people happily eat all that is on their plates but there are almost no obese people. Amazing! All this food cost us around $5 (as of November 2013).

We took a taxi at the Bazaar to meet Amir, our friend from university. We hopped on to Amir’s car and picked up his girlfriend Mitra from her office, then we drove north to Darband. Darband is on the northernmost end of Tehran, on the outskirts of Mount Damavand. It is where people of Tehran go to get outside the city and breathe a little. A river flows in the middle, there are restaurants and shisha cafes on its banks. All the boys and girls around us were dressed up to the nines so you can tell Darband is where young people socialise in Tehran. 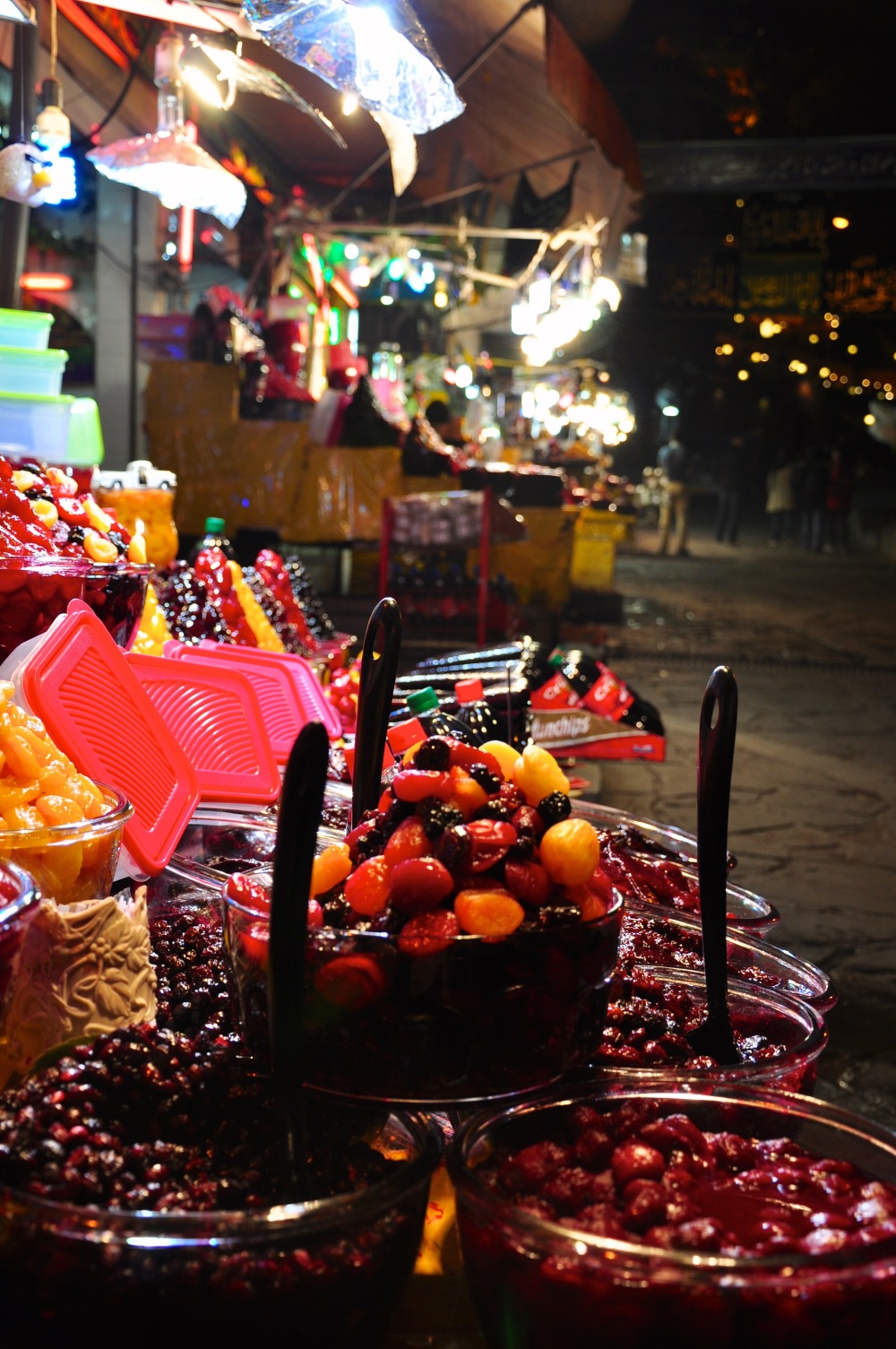 The next day we planned our day over breakfast. Iranian breakfast is very much like Turkish breakfast which made me very happy. They usually eat a pita-like bread with full fat white cheese (like feta), marmalade, butter, walnuts and grapes and drink lots of tea. They put cinnamon sticks in the teapot so it has a very nice flavour. They usually don’t take sugar with their tea but if they do they either suck on a sugar cube or put a hard, crystallised lollipop in their glass and wait a little before they drink the tea.

After breakfast we took a taxi to Sadabad Palace, which was home to the last dynasty, Pahlavis. I found it much more interesting and impressive than Golestan. There is the Green Palace, which was used during summer and the White Palace, which is the main building; and other smaller buildings which are now used as military, water, miniature and calligraphy museums. 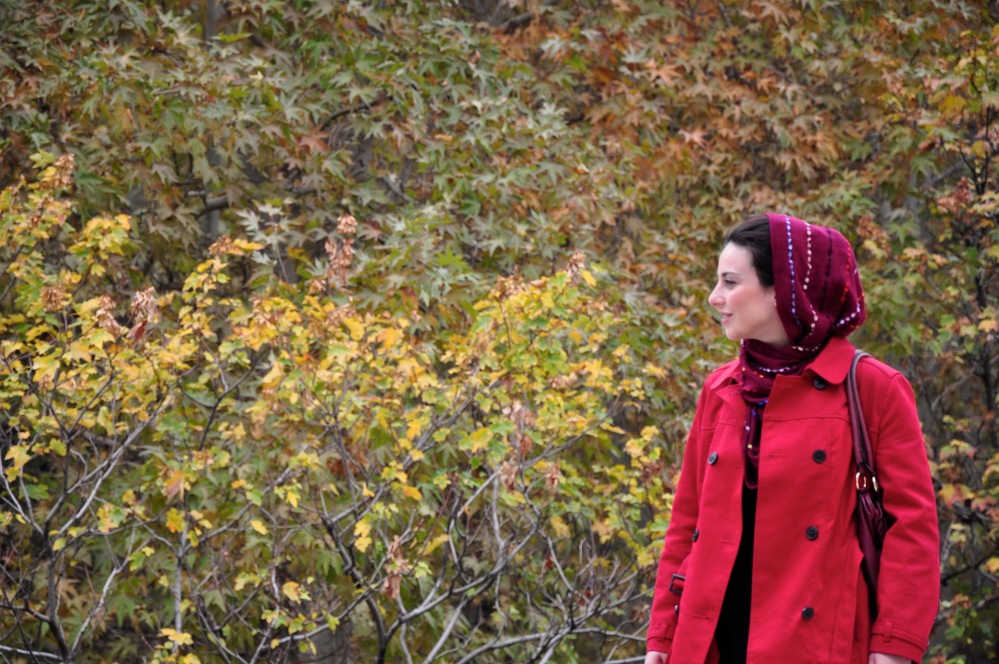 The Green Palace is quite small but it is a very beautiful building, there are mirror works on the walls and the ceiling just like in Golestan, curtains are woven with silver strings and the furniture is European. The corridor and bedroom walls are covered in very pretty fabrics that have Missoni-like patterns on them. The White Palace is much more modern, it was built in 1930s but the furniture is from the 1970s. We managed to visit the ground floor and the first floor, but the basement where Farah Diba had her private quarters was unfortunately being restored and was closed.

The Behzad Museum was what I enjoyed the most in Sadabat Palace, it exhibits the lovely work of miniature artist Hossein Behzad. I also really liked how the girl working at the Water Museum gave information with good English and great enthusiasm. 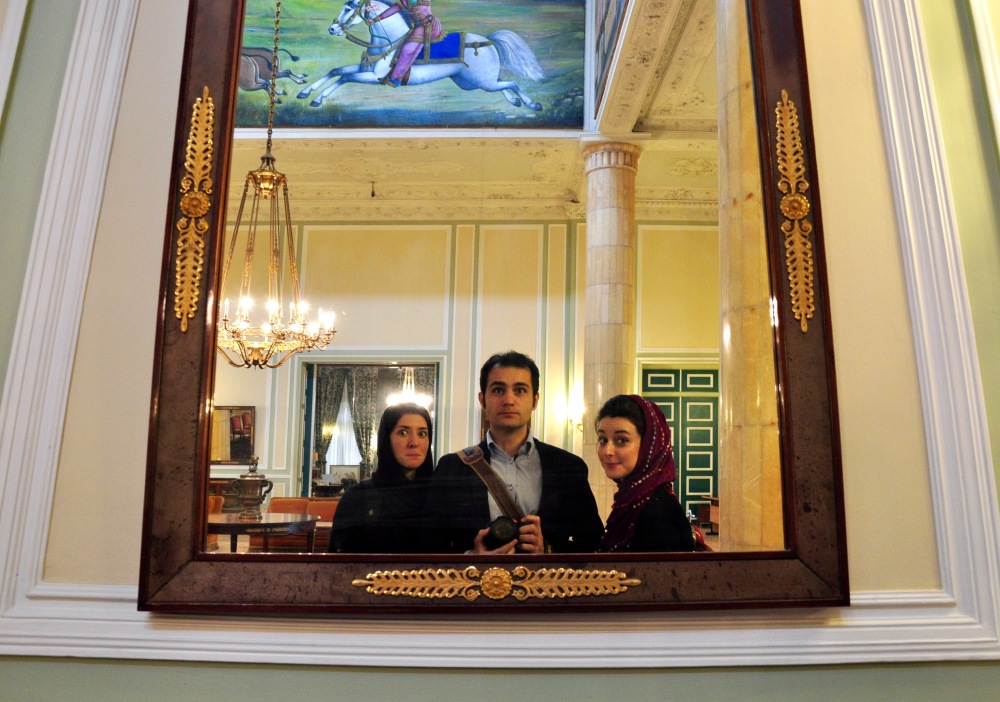 We went to Tajrish after visiting the palace and had lunch there. We shared a few dishes called Ash and Halim between us. These dishes were like huge bowls of thick soup really, Ash-e Reshte is a soup with noodles, spinach, lentils, beans topped with soured yoghurt, mint butter and fried onions. Halim is made by simmering shredded lamb, wheat and milk together and topping the thick mixture with sugar, sesame seeds and cinnamon. The third soup we had was a mixture of the two and it had some other stuff in it. I thought Halim was something between a soup and a pudding which was really weird and I didn’t really like it but I loved Ash-e Reshte, I can happily eat it every day for the rest of my life. We paid a ridiculous amount of money for all of these (about $2 – as of November 2013). After lunch we had pomegranate and orange juice, there are carts or shops that sell freshly squeezed juice in every corner, the juices are absolutely delicious and very cheap.

We got on the metro from Tajrish, the metro system is new and speedy and it covers pretty much the whole city. On the metro two young guys started asking Ali some questions about us while everyone around us listened very carefully, it was very amusing. It turns out the guys were filming in Sadabad Palace and saw us there.

Iranians treat foreigners with a very positive attitude and great interest, they are especially fond of Turkish people. According to one taxi driver we spoke to, 70% of people in Tehran are of Azeri-Turkish descent. As soon as people heard that we were speaking English, they bombarded Ali with questions about where we were from, why we came to Iran, how we can travel without a husband, what life is like in London and how they can go and live there. They tried to speak English and Turkish with us whenever they could. 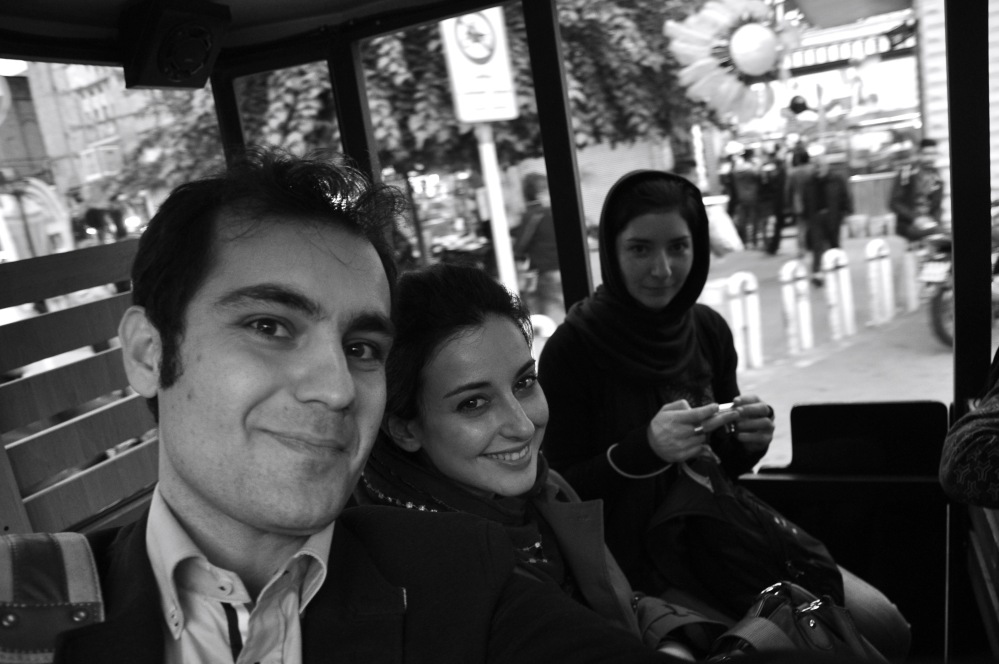 We got off at Imam Khoumeini station and literally ran all the way to Museum of Royal Jewels but they wouldn’t let us in because the museum was closing in half an hour. Ali was very pissed off, he argued with the guards but they wouldn’t budge. So we went back to the bazaar and did a bit of shopping; Lauréne bought a colourful scarf and I bought a tablecloth, some saffron and dried blue flowers to make tea with. There were many different kinds of plums and red berry type of fruits in the bazaar that I had not seen anywhere else. Iranian dates, walnuts and pistachios are also top quality and can be bought from the Bazaar. All these things sitting in sacks next to each other in shops were so visually appealing that I just wanted to buy everything. We spent a lot of time tasting bits of everything and bought a snack of liver and kidney kebabs from a street vendor.

Amir and Mitra took us to a restaurant called Hani Parseh after work. It was lavishly decorated but you pick up food with trays and pay at the till canteen style. We wanted to taste as many dishes as possible so we shared a lot of food between us. We tried Baghla-polo (rice with broad beans and dill), rice with berries, rice with saffron, Tabriz meatball (meatball with lentils and rice that has a plum in the middle), aloo sabzi (veggies with lamb and plums), ghormeh sabzi (meat and spinach), fesenjoon (chicken in pomegranate sauce), bademjan (chicken with aubergine) and the same olives we had the other day, they were all delicious and again we paid around $5 per person (November 2013).

We went to Milad Tower after dinner, this place was designed as a television tower but it also has restaurants, shops and a convention center in it; but the main goal in building it was to bring in a new symbol for Tehran to replace Azadi Tower. Milad Tower is the 6. tallest television tower of the world at 450 meters, you can get up to the observation deck at 200 meters in just 40 seconds with the lifts; these guys obviously spent a lot of money on this tower but it is quite impressive. There is a nice view from the top, Tehran is prettier at night anyway. We bought some souvenirs from the designer gift shops inside and called it a day.